Should Dogs Be Left To ‘Work It Out’ On Their Own? 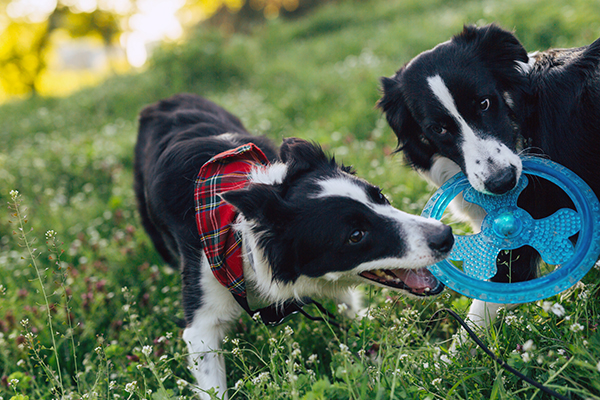 How many times have you heard someone say to you ‘Let them work it out’ when two dogs are in a disagreement with one another? This is not only terrible advice, it could potentially have serious consequences for one or both dogs. Here’s why: ????First of all, not all dogs have the skills to properly work things out, especially adolescent and young dogs. Just like you would closely monitor an altercation with two kids at the park and intervene when you see things are going sideways, you should be doing the same for your dogs. Always be prepared to step in if you need to.

????You don’t know the other dogs fight and bite history and the other owner may not even know it, especially if it’s a rescue that they’ve had for less than a year. That dog may have a history of doing serious damage to other dogs that both of you know nothing about.

????Do you want someone else’s kid putting your kid in their place? Maybe. But what if that kid chooses to do so using his fists? Still okay with you? In dog terms, fists and punches would equal teeth and biting and, if that dog doesn’t have good bite inhibition, then that could end with a very costly vet visit for you.

????For some dogs, the more they are left to their own devices to ‘work it out’, the better fighters they become and the fewer warning signals they give prior to attacking. A “telling off” becomes an all out assault that no one will see coming because it won’t be preceded by any growling, snarling or other obvious cues. And once you lose those warning signals, it can very hard to train them back in.

????A bad altercation between two dogs can leave one or both with behavioural issues that are difficult to reverse and ruin their ability to properly socialize with other dogs in the future. I’ve worked with countless dogs who’ve developed fear or aggression issues (or both) because of altercations they had with other dogs.

The bottom line is these altercations won’t always end well for your dog, so why risk their physical and emotional well being? So please, for your dogs sake, the next time your dog starts to get into it with another dog, call them away and be done with it.

***********
Are there some myths or fallacies out there that you’d like me to dispel? Email them to me and I might make them into my next post!