Teaching Your Dog To Be Calm 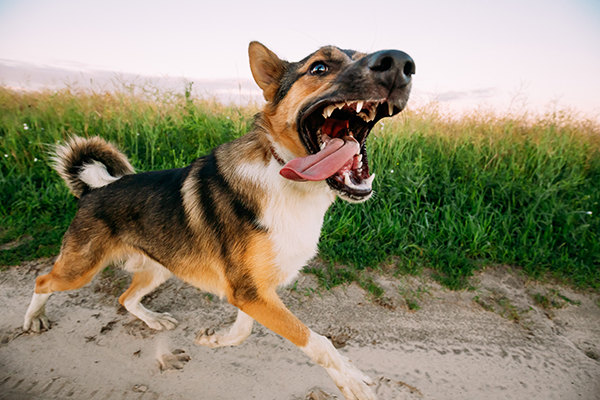 Have you ever been charged at by an aggressive dog? If it ever happened to you, would you know what to do?

Yesterday, my own dog was attacked. Well, almost attacked. But only because I knew how to stop it from happening.

Here’s what went down:

I was walking with a client and her dog during a training session. Far off in the distance, a dog and person were approaching us. Even from hundreds of feet away, I could see that the dog was already eye locked on us. My client assured me this was a friendly dog that she knew from the neighbourhood. But as it approached, its body language only became more threatening as it threw off signals like a stiff, slow, stalking gait, cold, hard stare that was fixed on my dog and repeated tongue flicking.

This was no joke – the dog was literally three times as big as mine – and everything about its body language screamed “I am coming over there to end you.”

As we were about to cross paths on opposite sides of the road, the dog crossed the road towards us pulling her owner behind her and, within a second, went on the attack after my dog, ripping the leash out of the owners hand and almost knocking her off her feet.

But here’s where my skills came in. Twenty years of training and experience has prepared me for moments like this and, before the offending dog had a chance to get to mine, I jumped in front of my dog to block its approach and then advanced on it as I repeatedly shouted at it. The dog did NOT expect my reaction and startled right as it got to my dog, backing off and walking back to its owner, a frail older woman, who didn’t weigh more than a minute, uselessly standing there with a stunned expression on her face. She didn’t even pick up the dogs leash right away but let it wander around for a bit instead.

We all walked away unscathed, thankfully, and after all was said and done, my client dubbed me a Ninja for my lightening fast reaction, the likes of which she had never seen before. The fight was literally over before it even began.

This then brought up the question from her – what do you in a situation like that? Even though she witnessed it, it all happened faster than she could process it.

While the below will not necessarily work in every situation, here are a few things you can do to thwart off the majority of attacks from oncoming dogs. Keep in mind that your reaction needs to be lightening fast and done with intensity.

1) If your dog(s) are on leash, put them behind you so that you are between the oncoming dog and your own.

3) Start shouting at it “GET!! GET OUT OF HERE! GO!! YOU GET!!” or “HEY!! HEY!! HEY!!” in your most commanding voice. The shouts need to come as an onslaught like machine gun fire, especially if the dog is rapidly approaching, and spoken with confidence and authority.

4) While shouting, repeatedly point at the dog in a threatening manner. Even better, if you’re carrying a walking stick, swing it at the dog or carry a self opening umbrella and pop it open in the dogs direction. You can then use the umbrella as a barrier between the dogs, jabbing the oncoming dog with it as needed.

5) Stand your ground or, if possible, advance in the dogs direction, even just one or two steps, keeping your dog(s) behind you at all times (use the leash to keep them there). Stand as tall and firm as you can.

6) If the dog goes around you, keep turning around to face it (with your dogs behind you), repeating any of the above steps as necessary.

You may also want to carry Pet Corrector spray (available at most pet stores) with you. It’s a can of compressed air that, when expelled from the can, makes a hissing sound and blasts the dog with a hard puff of air. Aim the can at the attackers face and let her rip. This often works to break up an active dog fight, as well.

I truly hope you never have to use these skills, but preparation is key. Take some time to imagine this scenario playing out in your mind a number of times as you visualize how to effectively respond so that you’re ready if you’re ever faced with this in real life.

Teaching Your Dog To Be Calm